As the trade deadline approaches, the Braves may look to acquire a cost-controlled big league bat to speed up the process of their rebuild. With Ozzie and Dansby getting closer to MLB ready, the team’s biggest needs are a third baseman, a left fielder, and most importantly a catcher. Let’s take a look at a few guys the Braves should inquire on that are on teams selling between now and August 1. 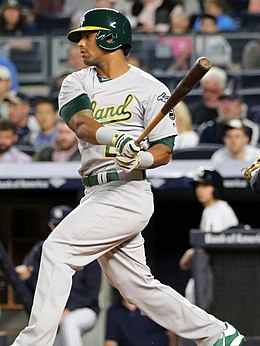 The A’s are well under .500 and will most definitely be listening on offers throughout the next week. If the Braves offer up a few arms, it may be hard for Billy Beane to resist. Davis is far from a perfect player. While he posts mediocre batting averages, his on base percentage is pretty lackluster. However, his power could be too much to pass up for the Braves. He is a guy who can hit over 30 home runs in a season, something this lineup desperately needs. The Braves have a bunch of contact hitters coming up, so they can afford to have a straight up power hitter. What makes him most appealing is that he is still cost controlled until 2020. Davis already has 23 bombs on the year, much more than anyone on the Braves currently.

Third base is a big need for the Braves and Solarte could be the solution. The Padres likely do not want to move him but it appears they are having a fire sale of sorts and they will most definitely be listening. Solarte is enjoying the best year of his career and has displayed some pop in his bat. He is team controlled until 2020 as well. His asking price would likely be higher than that of Davis, but the Braves and the Padres have participated in multiple deals in recent years. Its not out of the question that the Braves could offer up a package that is too good for the Padres to resist.

Yes, the Phillies are in the same division as the Braves, but so are the Mets, a team the Braves have done business with during this rebuild. The Phillies are rebuilding as well and are in sell mode. They have a capable catcher in Carlos Ruiz for the time being and one of the best catching prospects in baseball in Jorge Alfaro. This makes Cameron Rupp a trade candidate. The Braves happen to need a long-term solution at backstop, and Rupp could be the guy. He offers power at the catcher position, which is important considering the plethora of contact bats the Braves have. He is under team control until 2021 and is a much cheaper option than 2017 free agents Wilson Ramos and Matt Wieters.