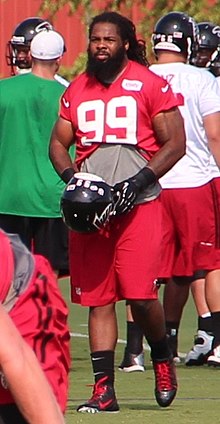 Derrick Shelby has officially signed with the Falcons, but Atlanta also made a move to re-sign one of their own defensive players on the first day of free agency. The Falcons signed Adrian Clayborn to a two-year deal worth $9 million.

Clayborn spent the beginning of his career with the Buccaneers and was very effective in getting into the backfield. After four years with the Bucs, Clayborn inked a one-year deal with the Falcons last offseason. He played in every game and started in four.

Dan Quinn made it clear that re-signing Clayborn was a priority even though he only recorded three sacks last year. He is physical and can overpower defenders and proved to be an effective defensive lineman for the Falcons. Atlanta seems to have avoided signing big-name defensive free agents and look to be collecting as many guys as possible hoping that they can find the right combination up front. As of now, Clayborn will be teaming up with Vic Beasley and the newly acquired Derrick Shelby in getting after the quarterback, but look for Atlanta to add even more help in free agency and the draft.