The 2015 NFL Draft is about to be upon us, and all NFL fans can’t wait. The draft is one of the most important days in the NFL calendar year. It is always a must watch because fans see what players will represent their team. This is my final mock draft for this year’s draft. Here’s to Atlanta Falcons front office having an A+ draft!

Alvin “Bud” Dupree out of Kentucky could be a prized possession for the team to get a hold of him. Dupree is bigger and has more weight than most of the players at his position, standing 6’4’’ and weighing in at 269 lbs. Watching this edge rusher’s film made me double-take after most plays. He is one of the most explosive athletes I have seen in college football in past years. His coaches at Kentucky salivated over his skill and explosion, yet they never let him settle into playing one position. In addition, this player absolutely killed the 2015 NFL Combine. Running a 4.56 40-yard dash, he ran a 1.60 10-yard split. That 10-yard split is faster than the top rated wide receiver in the 2015 draft class, Amari Cooper. He had a 42-inch vertical jump and an 11’6’’ in the broad jump. Basically, Dupree is an athletic freak to say the least. Dupree needs to learn how to bend the edge after getting a first-step on the offensive tackles, but most NFL coaches can teach that, especially with a talent such as Dupree. He also needs to depend on technique over his physical gifts. Dupree is a little raw, but he can be a top name in the NFL over the years if he learns to use technique. His game reminds me of Rams edge-rusher, Robert Quinn, one of the best pass-rushers in the NFL. If Dupree can use technique with his physical gifts, he can resemble the play of Quinn. Being coached by Dan Quinn is also a bonus, with his success he has had throughout his coaching career. Dupree might be a little raw, but he has all of the physical tools and gifts that any organization could ask for. If coached correctly, watch out NFL; he could be scary good.

A lot of mock drafts have the Falcons attacking the offensive side of the ball. Does anyone remember Atlanta had the 32nd ranked defense in 2014? With Robert McClain (cornerback) and Dwight Lowery (free safety) leaving the Falcons, Atlanta has issues with their secondary. With no nickel cornerback or starting safety, Atlanta should look to take one early. PJ Williams has the speed to play cornerback, but also has the build to play at the safety position. Williams was incredible during the NFL combine, and had similar numbers compared to Bud Dupree. Williams is superior at bump-and-run coverage, patient with his hips, and is able to stay on top of vertical, inside, or outside routes. With the NFL rules protecting the wide receivers, Williams might be at a disadvantage with his violent style he plays with. He was the defensive MVP in the 2013 National Championship Game, so he can play when the pressure is upon him. The Florida State prospect is also a very physical and aggressive player when he gets the chance to hit. I believe Williams is a perfect fit in Quinn’s defense. He can cover, he can hit, he can tackle, and he has a high football IQ. If he’s on the board, take him.

Atlanta has a very noticeable missing piece to their offensive line, and that is who is the left guard? Getting a big boy like Tre’ Jackson could solidify to left side of the line for years to come. Jackson is one of the top guards in the 2015 class, and he could adjust to Kyle Shanahan’s zone blocking scheme. Jackson was an All-American in college and was first-team All-ACC for two straight years. Jackson is great at finding a man, engaging to block them, and seal them for a hole in the running game. He will have to work on his conditioning and his weight, but other than that, he could be very valuable for any team. If coached the correct way, Jackson can be a starter in this league for the next 10 years.

David Johnson is a name that has been flying way under the radar during this draft process. Many fans will admit they do not know much about the 6’1” running back could be one of the sleepers in this draft. Johnson ran for 1553 rushing yards and totaled 17 rushing touchdowns in 2014. Johnson had over 30 catches in all four years in his college career, and he would be a mismatch for linebackers and safeties that would guard him. Johnson can change direction in the blink of an eye and he knows how to create yards after contact. His game is similar to Chicago Bears running back, Matt Forte, who is known around the league for his pass catching ability. Realistically, Johnson probably will not be the starting running back in his rookie season, but he can develop into a playmaker and maybe eventually the starter the Falcons have needed since Michael Turner. 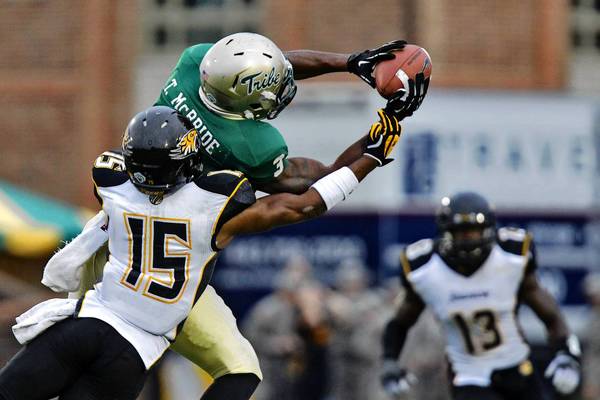 Tre McBride could be taken in the 3rd round to falling to the 5th round. Some NFL GM’s are not impressed by players who do not play the best competition. Do not be surprised if McBride gets overlooked, and do not be surprised if McBride is a steal in this draft. McBride will catch anything thrown his way, He is quicker than most of the receivers, and has elite body control. He did not play against the best competition in college, but he is a talent that is rising on NFL teams boards. He still played well against better competition, such as when he played West Virginia in 2014. He had 3 catches for 108 yards, and those 3 catches were more notable than the numbers. He has improved his route-running and can find the openings in zone coverages, which is a key trait for a wide receiver. McBride is also very intelligent and has a high football IQ. He needs to improve on selling his routes and leaving his defender in the dust. I am not positive McBride will be available, but many teams are overlooking him for receivers out of more notable colleges. Even though he did not play against very great competition, I believe his game can transition into the league.

If you ask any SEC defensive player about Jalston Fowler, they will know exactly who you are talking about. Jalston Fowler can be described in one word, a beast. Fowler played halfback in the beginning of his career at Alabama and then he switched to fullback. Fowler can pummel linebackers, is a solid pass protector, has above-average vision, and can catch out of the backfield. He would bring an attitude that the Falcons need in order to become tougher. Atlanta needs to add toughness and aggressiveness to their team, and Fowler defines those two traits. He would be a backup at the beginning of his career, but I feel after watching Fowler’s game film, he can become a starter in this league.

Jamison Crowder might be small at 5’8’’, but his play is too good for him to not be drafted. Crowder is a short and quick receiver, but also could be a return man that the Falcons have needed. His play is very similar to wide receiver Eddie Royal, who is a little guy but a hard player to cover. He has the experience at the slot receiver, which the Falcons could utilize, and also has return experience. He is limited at his size, so I feel NFL GM’s will overlook him. I definitely could see Crowder making the roster in the fall, and he would be a low risk and might be a high reward later on.

7th round draft picks very rarely turn out to be special for NFL teams, so it is a shot in the dark to pick in this round. Trey DePriest started all four years at a top football college in Alabama. Having any player from the Crimson Tide is a plus because the best coach in college football, Nick Saban, coaches those players. DePriest is very good against the run, he plays with a lot of contact, and has quick feet. If he ever wants to become a linebacker in the NFL, he needs to work on wrapping up in tackling and become better in coverage. Like I have said before, I tend to favor players out of the SEC. When players play the best competition week in and week out, how can you not respect them? DePriest has the talent and work ethic to make a 53-man roster, and could contribute on special teams.

Falcon fans, let me know what your take is on Mock 4.0. I will also add this, I did not worry about trading in this mock, but I am 99% positive the Falcons Front Office will make a trade at some point in the 2015 Draft. So subscribe, comment below, and tell us what you think!