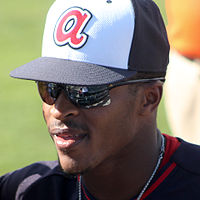 As the minor league seasons have come to an end, let’s see how we did on the farm this year.

None of our farm teams finished in 1st or made the playoffs. These records may not be encouraging, but the farm had a great year. We had some prospects flop, and some prospects shine. Here are my movers and shakers for 2014.

Prospect Of The Year:

Ozhaino Albies was nothing short of stellar this year. You know a player is playing well when he launches Andrelton Simmons into trade talks. Ozzie went from unknown to batting .328, hitting 28 doubles and 11 triples, and also picking up a Future’s Game appearance. Ozzie was definitely the biggest mover out of our prospect group, and I can’t wait to see him in 2016

Flop Of The Year:

My main 3 are Max Fried, Kolby Allard, and Braxton Davidson. Daniel Winkler, who was the AA pitcher of the year before undergoing Tommy John Surgery, Tyrell Jenkins, and Mallex Smith will all be on Atlanta’s roster next spring. Fried is coming off of TJS and is a former #7 overall pick. Allard had an excellent 6 innings this year, can’t wait to see more. Davidson may be our future in Left Field, we’ll have to see if he moves to Mississippi this year. Also watch out for 2 draft picks who had excellent summers: Mike Soroka, who had and Austin Riley. I also want to see if Touki Toussaint  and Ricardo Sanchez improve, as they are top level prospects not playing well.

Prediction For The Biggest Mover Next Year:

Isranel Wilson is my pick. Isranel is only 17, and his .222 batting average isn’t impressive, but that is credited to a slow start. He batted over .300 for most of the season. Wilson cranked 10 HRs in 48 games, and will get a lot of experience in Rome in 2016. Also watch out for Connor Lien (.285, 9 HRs). Both play center field.

This is the worst kept secret in all of baseball. SS Kevin Maitan. You all saw the moves that gave us international draft slots; sending off Cody Martin, Garrett Fulencheck, and Jordan Paroubeck. But why? If you overspend on your international signings for 2015, you are given a penalty of not being able to sign INTL Free Agents the following year. After signing Derian Cruz and Christian Pache, the Braves got plenty of money to not go over the cap. There are rumors that the International Free Agent “Draft” will actually BECOME a draft, so the Braves are willing to overspend this year since the system will soon be obsolete. Maitan is the big fish here, forget any 2016 free agents. The 15 year old is already drawing comparisons to Miguel Cabrera, and is smooth with the glove. Keith Law reported that the Braves have a “handshake agreement” with him, but I’m going to bite my tongue until it’s on paper in July