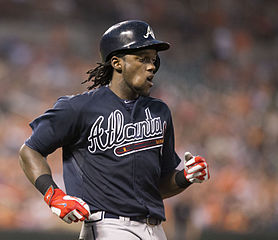 (This article is a collaboration between Jake Gordon and Harrison Coburn.)

It was only a matter of time until Cameron Maybin was traded. With Mallex Smith absolutely tearing up each and every minor league level he reaches, he should be the Braves’ starting centerfielder by June. The Braves may regret not selling high on him at the deadline, but most teams weren’t buying him being able to sustain that type of success.

Heard around AS Break last season that clubs were interested in Cameron Maybin, but not going to overpay based on 2 strong months. #Braves

The league executives were right.  Maybin came back to reality in 2015’s second half, and his value most definitely diminished. Nevertheless, the team probably should have gotten a better return with Maybin coming off a career year offensively. Let’s take a look at the return:

Speier was the “big” prize in this move. He was part of the Boston-Detroit Cespedes trade. He does appear to have a bright future in Atlanta’s bullpen, however, given his strong minor league stats and the fact that he is a lefty. We may see him sooner than later, as relivers tend to fly through farm systems faster than any other position. Krol was a throw in reliever to be a lefty in our pen, though his numbers are nothing great. The Braves saved about $6.5 million with this move, which is not much. Considering Maybin is due $8 million this season, it looks like the Braves took a little bit of the tab as well.

I’m scratching my head a bit at this one, but it’s clearly a salary dump. Speier is not ranked in the top 30 in a very weak Tigers farm system, and Krol has been suspect at best in 3 MLB seasons. I feel like this was a poor return for a decent player with a team-friendly contract. The market for centerfielders is pretty weak this offseason, and Coppy probably should have waited for teams to get desperate as the winter prolonged. I understand that Maybin was expendable, but I just have a hard time believing this deal is the best we could have done. Coppy must really want to shed salary.

As for the centerfield situation, it’s unlikely the Braves find a suitor willing to pick up the tab on Michael Bourn. I expect the team to keep him around to mentor Mallex Smith, who has a similar skillset, while bringing in a right-handed platoon guy who can man center until Smith is ready. Here’s a link to an article we did on possible free agents who fit that bill.

Don’t worry Braves fans. Sure, Maybin was one of the only guys in our lineup who could hit a baseball, but Mallex Smith will not only be way better long-term, he’s also the leadoff man this lineup has been missing for years.