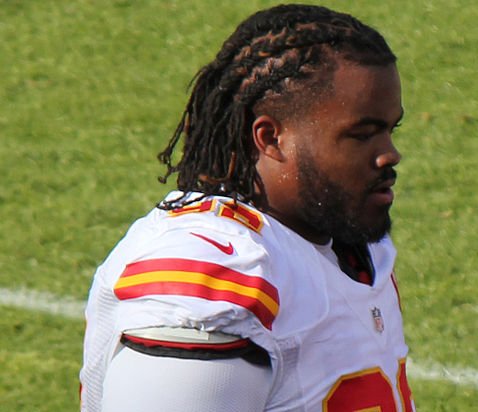 Poe was the big splash Falcons fans were waiting for all free agency. The only way Atlanta was going to be able to get this deal done was if Poe would accept a one-year deal. Luckily, the free agent market for defensive tackles went ice cold, and Poe was left with underwhelming long-term options. He chose the Falcons over several other teams and even turned down some more lucrative offers to come to Atlanta.

From a football perspective, Poe has the ability solidify not just the defensive line but the Atlanta defense as a whole. Jaws dropped when his nearly 350 pound self ran a sub-5 40-yard dash at the combine five years ago. Oh yeah, he also busted out 44 reps on bench press for good measure prior to his amazing 40-yard dash. Poe reached pro-bowls in both 2013 and 2014, but has suffered from setbacks since due to a back surgery he underwent in 2015. His numbers have not been the same the last two seasons, but Quinn thinks he can get a lot more out of Poe this upcoming season.

This is a Falcons defense that really started to show some progress in the second half of last season and throughout the playoffs. The one glaring weakness, however, was their interior defensive line. The addition to Poe next to the up and coming Grady Jarrett, along with Jack Crawford and whoever else the Falcons decide to draft/sign, strengthens the defensive line immensely. Atlanta will have a much easier time stopping opposing rushing attacks next season.

If Atlanta had committed more years and money to Poe, this grade would not be nearly as high. There are concerns regarding Poe’s health and weight. He may never be the same high-usage player he has been over the last five seasons in Kansas City. But at 27, there is reason to believe Poe still has plenty in the tank. Atlanta went through heavy medical evaluations of Poe’s back prior to signing him and believe that it will not be an issue. There is also a whopping $500,000 bonus available for Poe if he can maintain a playing weight of 330 pounds. Poe will be playing in a friendly system with his eye on a monster contract next offseason. This was a key signing for a team looking to return to the Super Bowl.

Crawford was the Falcons’ first signing of this year’s free agent class, and although he is far from a headline signing, he could play a big role next year in this Falcons defense. Atlanta has already parted ways with Jonathan Babineaux and Tyson Jackson, so minutes are available across the defensive line. The addition of Poe as well as the return of Derrick Shelby should account for some of those snaps, but Crawford will have the opportunity to battle for a significant share of the snaps.

There is nothing typical about Jack Crawford. He has an unbelievable frame at 6′ 5″ and over 280 pounds. That frame comes with natural athleticism. Crawford originally came over to the United States from England to work on his basketball game. Transfer rules made him sit out a season, which led to Crawford giving football a shot. The rest is history as he earned a full scholarship to Penn State on his way to becoming a 5th round draft pick.

His enormous frame and athleticism make him an intriguing addition to this Falcons defensive line. Crawford was definitely viewed as a project coming out of college with such little playing experience. It took him a while to catch on, but Crawford has become a productive player the last two seasons with the Cowboys, playing in all 32 games. Quinn is usually able to get the best out of his guys, so it will be interesting to see if Crawford can continue to grow as a player in 2017.

Crawford has some upside and can be utilized as a defensive end or defensive tackle. His versatility is a plus, and Atlanta desperately needed to add more bodies across the defensive line. Only $3 million of his contract is guaranteed and he will receiver a base salary of just over $2 million this season. If Crawford plays well, the Falcons can keep him for a slightly higher salary next season, but if he underperforms Atlanta can cut him with little cost.

Kyle Shanahan took Aldrick Robinson with him to San Fransisco, forcing the Falcons to add a receiver in free agency. Roberts seems to be on the decline after his rookie contract ended in Arizona. He only caught 14 balls for 188 yards last year for the Lions and has only caught 25 total passes over the last two seasons.

With that being said, Roberts is another 4.4 type guy who will benefit from playing with a loaded arsenal around him. It was not too long ago, that he was targeted over 100 times in a single season with Arizona. He has proven he can make plays in this league and will provide another explosive weapon for Matt Ryan to utilize.

Roberts can also serve as a return man, which is necessary due to the departure of Eric Weems.

He is a C- simply because he is likely to take over Aldrick Robinson’s role. While there is not much difference between the two, I would give the edge to Robinson. Either way, Matt Ryan is going to have a field day throwing to his wealth of receivers in 2017.