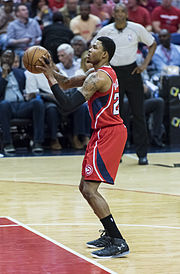 In a rather surprising move, Coach Mike Budenholzer made it known to the public today that Kent Bazemore would be the starting small forward for the Hawks’ opener against the Detroit Pistons on Tuesday night. Many figured that Thabo Sefolosha would be the starter, especially considering the team was 42-9 in games Sefolosha was healthy enough to participate in last season. It’s unclear whether the team feels that he is not healthy enough to handle starter minutes or if they feel he is simply better suited to play alongside the second unit.

Much like Sefolosha, Bazemore relies on his ability on the defensive side of the ball as well as his three point shooting. In his 10 starts last season, Bazemore averaged 10.2 points per game, as well as 4.8 rebounds. While these numbers aren’t too far off from Demarre Carroll’s production last season, Carroll possesses lockdown defensive ability and played great in the postseason, while Bazemore struggled. Though he is a downgrade, there is hope that Bazemore could shine even brighter in his second year in Coach Bud’s system. We have seen how a lot of players have improved their games after a season of adjusting to his style of attack.

I like Bazemore, but I’m still not crazy about the idea of him starting. He is more of a spark plug off the bench who can play solid defense. However, with Tim Hardaway Jr. adjusting and struggling throughout the preseason and Thabo coming off his injury, he may be the best suited guy for the job right now. We will see if this move is permanent, but Bazemore did play pretty well when he had an extended role with the Lakers two seasons ago. I’m going to have to trust Coach Bud’s judgement on this one.