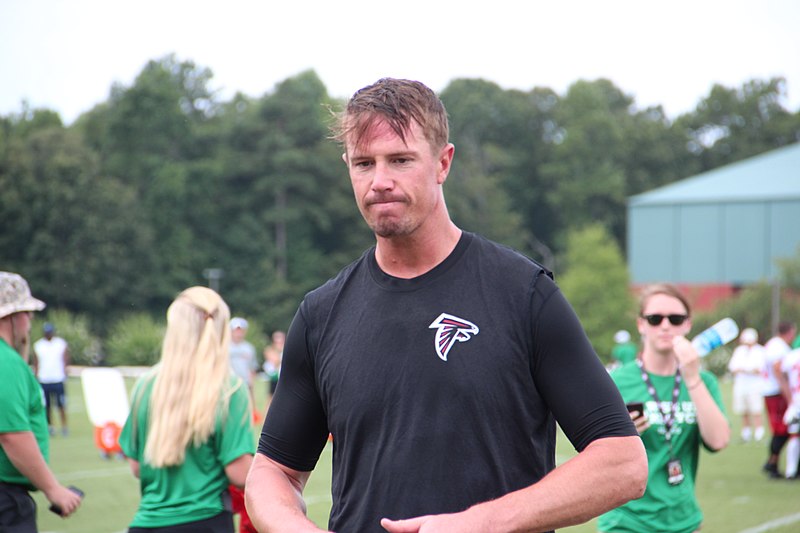 There is no doubt that there is a cloud hovering over Matt Ryan’s head entering his fifth playoff appearance. Ryan has been notably scrutinized for not being able to get the job done when the chips are down. He has been a poor man’s Peyton Manning of sorts. But with Atlanta being out of playoff contention for the last three seasons, very few people still considered Ryan an elite quarterback. In fact, a lot of people, even so-called experts, had Ryan on the bottom half of their list of starting quarterbacks. However, this season the former #3 overall pick has reminded everyone why they thought he was going to be a star in the first place. He has been spectacular, a surgeon on the field, orchestrating one of the most high powered offenses of all-time. Ryan has looked more like Manning this year than ever before, and the question rings now louder than ever: can Matt Ryan really do this?

Matt Ryan broke out and began to assert himself into the conversation as one of the best quarterbacks in the league in 2010. He threw for 28 touchdowns and only 9 interceptions while leading the Falcons to a 13-3 record and the NFC’s top overall seed. However, with this performance came high expectations. Expectations that Ryan was not able to fulfill come playoff time. The Falcons were torched by the visiting Green Bay Packers in the divisional round, as Ryan threw for under 200 yards and 2 interceptions, one of which was a pick six just before halftime. While Ryan was able to receive a pass for his first playoff performance his rookie season, this one began a trend that still has people questioning how good Ryan really is.

The following year, Ryan failed to throw for 200 yards yet again in New York, while being shut out offensively. The Giants did go onto to win the Super Bowl, suffocating opposing quarterbacks throughout the playoffs, but that did not change the criticism Ryan would receive. It had been four years and three playoff appearances with Ryan under center, and the Falcons offense had yet to show up in any of them.

That all would change in 2012. Ryan put together his most magnificent season yet, throwing for over 4,700 yards and 32 TDs. Once again, the Falcons won 13 games and were the top overall seed in the NFC. The task was not going to get any easier for Ryan, however, as Atlanta was to face one of the best up and coming defenses of all-time in the divisional round. Ryan and the Falcons busted out to a 20-0 lead and it looked like Atlanta would cruise to victory, but a second half comeback by Russell Wilson put all the pressure back on Ryan to earn his first playoff victory. With Tony Gonzalez nearly in tears on the sidelines, Ryan led one of the best drives in Falcons history, hitting the Hall-of-Fame tight end time multiple times to set up Matt Bryant for a game winning 49-yard field goal. Bryant nailed the field goal and Ryan had gotten the monkey off of his for the time being.

That did not last long, as the Falcons squandered a double digit lead the next week in the NFC championship game. Even though Ryan threw for 6 touchdowns against two of the best defensive teams in the NFL, nobody believed he was ready to lead Atlanta to a Super Bowl.

The Ryan hate only grew when the Falcons proceeded to miss the playoffs the next three seasons. Ryan’s numbers saw a significant drop off, and there seemed to no longer questions whether Ryan could lead the Falcons to a Super Bowl, there were conclusions. However, the drop-offs in numbers and the team success were more of a result of talent on the offensive side of the ball rather than a drop off in Ryan. The offensive line was one of the worst in the league, the receiving core was thin and aging outside of Julio Jones, and the running back situation was shady at best. While the latter two things are important, nothing is more important for a quarterback than protection. Any time Ryan has been given time, he has shredded opposing defenses, no matter who is catching the ball.

The Falcons addressed that problem in the offseason by signing pro-bowl center Alex Mack. Mack has made all the difference in the world for the Falcons. He has turned the Falcons run game into one of the most deadly in the league and solidified the offensive line. Atlanta’s offensive line has been able to stay healthy all season long, and that type of continuity has allowed for them to get better each week. Ryan is getting all the time in the world, and he has put together an MVP season because of it.

The Atlanta receiving core has not always been healthy. Julio Jones, Taylor Gabriel and Mohammed Sanu have all missed several games, but Ryan has been nearly perfect no matter who is receiving the ball. He threw for 38 touchdowns and a career low 7 interceptions and earned AP all-pro honors. He finished at or near the top in nearly every passing category imaginable and has put together one of the best seasons ever for a passer. This season was not an accident. Matt Ryan is elite.  For years, Matt Ryan was unable to get more than a few seconds to throw the ball. His receivers could rarely get into their routes before he was in the ground. Now, Ryan is getting time and putting up numbers this league has only seen a few times before. His 117.1 passer rating for this season ranks fourth all-time among qualifying QBs.

The questions surrounding Matt Ryan’s playoff capabilities are warranted. 1-4 in the playoffs is just not going to get it done, even for the city of Atlanta. But Matt Ryan is not a choker. He is not just a regular season quarterback. Ryan preformed splendidly in his last playoff experience against two of the best defenses in NFL history. A few mistakes prevented Atlanta from reaching their ultimate goal, but Ryan has been locked in all season on eliminating the little mistakes. Eliminating those mistakes has gotten the Falcons the number two seed in the NFC and a first-round bye, a position nobody thought they would be in, but that is not good enough for this group. That is not good enough for Ryan, who is about to show the world on Saturday why he deserves to be the MVP of this league.