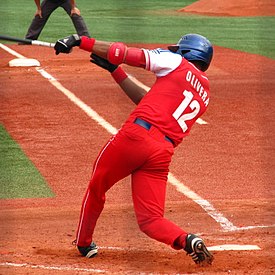 I didn’t think much when it was initially announced that Hector Olivera would be spending time in left field in winter ball this year. He will 31 years old by the time the season starts, and I figured it was more of a precautionary move for later on down the road. However, it has been announced that Hector Olivera will be making the move to left field for the Braves next season. Not only does this move change the dynamic of the offseason, it also affects Olivera’s value.

There are not many power bats on the hot corner that can be had on the open market for Olivera’s 6-year/$62.5 million price tag. However, there are an abundance of corner outfielders in the MLB who can hit for power. When the team made the move to get Olivera, one of the justifications they offered was that the market at third base was weak in the coming years given their price point. With the Cuban product now headed to the outfield, the team now finds itself testing that market.

What perplexes me is why the team doesn’t have Olivera man second base, where he played primarily in Cuba. Maybe the defensive range simply is not there, but if he can be the middle of the order guy the Braves have made him out to be as a second baseman, his value would skyrocket. The team could then add even more firepower to the lineup at third base and left field. However, this is not the case, so let’s move on.

While John Coppolella is now the general manager of the team, John Hart is still supervising and making decisions. Given his track record and our payroll, it’s likely the team now addresses the hot corner on the trade market. Adonis Garcia stepped up last season, but we all know he isn’t a starting caliber player in this league. I’d love his pop off the bench, but we need more help on the hot corner.  Free agent possibilities for the Braves include Daniel Murphy, David Freese and Juan Uribe. The Braves seem unlikely to pay the inflated price tag for Murphy after a hot postseason. However, I think it’s very realistic for the team to ink Freese of Uribe to one or two year deals.

The Braves have very talented internal options at third base. Rio Ruiz had a rough year, but played in AA at age 21. I’ll be completely honest, I’m not sold on Ruiz. I think the Evan Gattis trade was the worst deal we made last offseason. However, Ruiz still has the potential to turn things around when he likely repeats AA next year. If he does, he will be MLB ready sooner than one would think. The guy I am sold on is Austin Riley. I think he’s the best offensive prospect we have drafted since Freddie Freeman, but he’s also 18 and fresh out of Rookie ball. The point being? We have to find at least replacement level short-term options.

The Braves already had an abundance of outfielders under contract for next season, and adding Olivera to the mix makes it seemingly inevitable that a move will be made. Right now we have Olivera, Nick Swisher, Michael Bourn, Cameron Maybin and Nick Markakis under contract for the outfield. However, we also have a nice backup option in Eury Perez in the system as well as Mallex Smith tearing up the minors. Barring trades, it sounds like Olivera will man left field, with Markakis in right. Center field is where things get tricky.

Cameron Maybin was a bright spot on an otherwise abysmal offense, but Mallex Smith should be ready to contribute at some point next season. The team will surely want to start Smith if performs well. He’s the leadoff hitter this team has been needing since we had the old Michael Bourn. Speaking of Bourn, it sounds like the team wants him around to mentor Smith, as their brand of game is so similar.

So who are the odd men out? It would appear that Cameron Maybin and Nick Swisher are becoming trade candidates. It will not be easy for Atlanta to move Swisher’s fat contract, despite him being in the last year of his deal.

What I got out of the position change is that there has to be more moves in the works. However, I would temper any high expectations on the free agent market. I could see the team bringing in one of the third base options I listed, and perhaps a left-handed reliever. The only “splash” I could realistically see the team making is a potential Matt Wieters signing.

Trades will be the name of the game. While it’s unlikely the team approaches the amount of transactions they made this time last year, we are still in the midst of a rebuild and moves will be made. I think third base is a prime position to be addressed via the trade market, and Braves fans should keep their eyes peeled in the coming weeks.

Let’s just hope Hector Olivera can live up to the hype.