Coming out of high school as the number one recruit in the nation, Jones shined at the University of Alabama and had pro scouts everywhere salivating. The Falcons gave up 5 draft picks, including two first-rounders, in order to acquire the sixth overall pick in the draft where they selected the star receiver. The trade was a shocker and many people questioned whether or not Jones was worth all of the picks. He has proven any naysayers wrong. Although he has only been in the league for 4 years, his production has been outstanding. Last year, he finished 3rd in both receptions and receiving yards. He has become a consensus top 5 wide receiver in the NFL and his future looks extremely bright. He comes in at number 5 because even though he is young, he has rare combination of speed and size at the wide receiver position. Standing at 6 feet 3 inches tall, Julio Jones runs a sub 4.4 40-yard dash and has ridiculous hands. Julio Jones has already become a star in this league and there is a very good possibility he lands at number 1 on this list in the near future.

Matt Ryan was the 3rd overall pick in the 2008 NFL Draft. Coming out of Boston College, Ryan was a highly touted prospect and the Falcons took a chance on him. The Falcons started to immediately reap the rewards. Ryan came into his first NFL game as the starter for the Falcons. His first pass was a 62-yard touchdown to Michael Jenkins. The pass was a sign of things to come for the Falcons franchise. Matt Ryan led the Falcons, who had never had back-to-back winning seasons, to five straight winning seasons in his first five seasons. Ryan has thrown for over 4,000 yards in his last 4 seasons and already made 3 Pro Bowl teams. The knock on Ryan, early in is career, has been winning the big game. Ryan and the Falcons have struggled mightily in the postseason and the critics will not stop talking until Ryan can lead the Falcons to their first Super Bowl appearance since 1998. I think Matty Ice has it in him, but until then he remains at number 4.

Anderson was a pleasant surprise in the 1994 NFL Draft. Anderson was drafted in the 7th round, 201st overall. Anderson started getting starter snaps in 1996 when he rushed for 1,055 yards on 232 carries. His huge breakout year came in 1998 when he led the NFC in rushing. Anderson carried the ball an astonishing 410 times for 1,846 yards and 14 touchdowns. He was the star and workhouse for the famously known 1998 “dirtybirds” team that went to the first Super Bowl in franchise history. Unfortunately, after his All-Pro year in 1998, Anderson’s injuries started to become a problem and in 2001 he suffered a torn ACL that ended his career.

At age 33, Roddy White is now entering the latter years of his career. Drafted with the 27th pick in the first round out of UAB, White is still putting up good numbers for the Falcons. Now, as a number two receiver, there is no way White can put up the same kind of numbers he has in his career. However it is his consistency that has White as the second greatest Falcon draft pick ever. From 2007-2013 White caught for over 1,000 yards. He never dominated the NFL, but the length of his production is undeniable. It seems that 10 years into his career, he is finally losing a step, but expect to still see a few more years of White in a Falcons uniform. 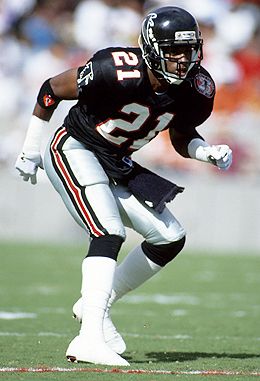 The choice for the best Falcons pick in history was pretty easy. Never have the Falcons, and perhaps the whole NFL seen a player as talented as Deion Sanders. Sanders’ speed was unmatched. At the NFL combine, Sanders ran a 4.2 second 40-yard dash, which is the second fastest in NFL History behind Bo Jackson. The Falcons drafted Deion with the 5th overall pick of the 1989 NFL Draft. The Hall of Famer spent his first five seasons with the Falcons, where he took over the city of Atlanta. He brought a swagger not just to Atlanta, but to the whole NFL. In these 5 seasons with the Falcons, Sanders intercepted 24 passes and scored 10 touchdowns. The Falcons were not able to resign Sanders in 1994 and he signed with the 49ers. He sort of became a hired gun after that, going from team to team chasing championships. He continued to electrify everyone around the league after he left and was inducted into the Pro Football Hall of Fame in 2011. He even had a stint with the Atlanta Braves, making him and Brian Jordan the only two athletes to play for both teams.