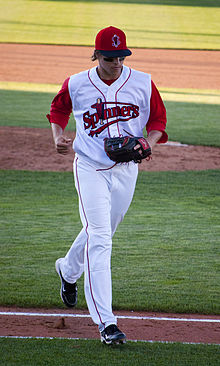 Today, the Boston Red Sox and former Braves GM Frank Wren cut former superstar prospect Garin Cecchini to make room for David Price. Cecchini was Designated For Assignment, and if he is released, the Braves should snag him up. The former 4th round pick was ranked the best hitter in Boston’s system in 2013 and was their 10th ranked overall prospect, and climbed to as high as #6 before he was called up. Here are his minor league stats for 2012:

He hit .322 in 2013, but his success never translated to the MLB. In 31 AT BATS. LET ME REPEAT THAT, 31 AT BATS. Cecchini hit .229 with 1 home run. I don’t know why Wren and company are dumping this kid so early in his career, but the Braves have an opportunity to get a top HITTING prospect for literally nothing. The other kicker? Cecchini plays 3rd base and hits left handed. I think he’s a good kid with a good bat who needs a fresh start. The only imaginable justification for Boston cutting him is because he’s being replaced by Cuban phenom Yoan Moncada and Pablo Sandoval makes too much money to be cut. If he doesn’t accept the assignment and elects free agency, I think he would be a great player for the Braves.

Coppy should immediately snag this kid and stick him right at 3rd base and give him a chance to start. His numbers will pick up if he’s an everyday 3rd baseman. You know what they say, one man’s trash is another man’s treasure.