John Hart has wasted no time making moves since taking over the reigns of the Braves organization. He has been very aggressive in his attempt to rebuild this roster and bring back the “Braves Way.” He has emphasized stockpiling young arms in an attempt to create an elite staff, much like the division rival Mets. If the Braves did not totally fall off after the All-Star Break, Hart would be in strong consideration for Executive of the Year votes. He has done a model job of rebuilding a team. The first year has not been pretty, but it’s called a rebuild for a reason. Let’s take a look at Hart’s finest work since taking over after the 2014 season:

In essence, this trade was literally us purchasing Touki Toussaint from the Diamondbacks. The Braves picked up the $9.5 million Arroyo was owed for 2015 along with a $13 million club option for 2016 with a $4.5 million buyout. I predicted that we would likely never see Arroyo in a Braves uniform, and I was correct. The righty was sent to the Dodgers in the deal for Hector Olivera at the trade deadline. Therefore, in retrospect, we basically got Toussaint for free. Gosselin is a nice bench player, but he has nowhere near the trade value of the 2014 first rounder Toussaint. Touki has struggled at times with A-level Rome, posting a 5.73 ERA in 10 starts. The 19-year old has struggled with his control since being acquired, posting a 6.1 BB/9 rate. He is young and has time to master his control, and once he does he has the stuff. Toussaint is a nice prospect, and definitely a consensus top 10 prospect in the organization. The results aren’t there yet, but the talent is absolutely there.

The Braves reacquired Arodys Vizcaino from the Cubs for Tommy la Stella, who started at second base for Atlanta after Dan Uggla’s release. He started off hot with his contact bat, but really came back down to earth down the stretch in 2014. He has battled injuries and has struggled in the Cubs organization all season long and has only posted 28 at bats for the Cubbies. Jace Peterson is most definitely an upgrade from la Stella. In Vizcaino, it appears the Braves have their closer for years to come. An 80-game suspension set him back for the first half of the season, but resting his injury plagued body has certainly paid its divdends. Vizcaino has been nearly unhittable since his return, posting a 0.44 ERA in 22 appearances. The problem is the lineup does not give Viz enough save opportunities. Getting the 24 year old back for a below replacement level second baseman is a steal in my book. 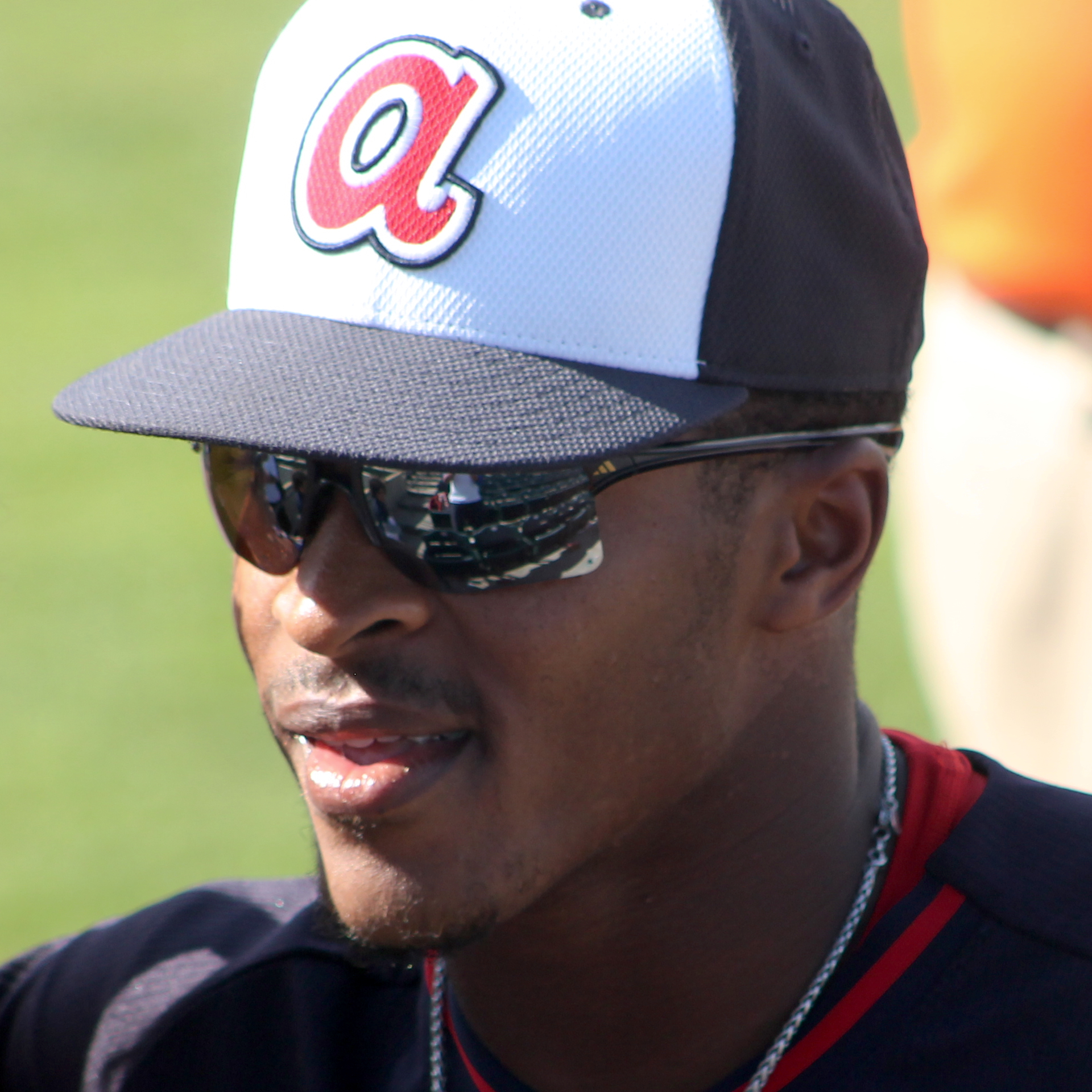 Long story short, the Braves got four solid prospects for Justin Upton’s expiring contract. Upton was a fine player for the Braves, but his vulnerability to strikeouts did not make him an ideal fit for Kevin Seitzer’s hitting approach. The team was right not to pay Upton big bucks after the 2015 season. Instead, they stocked up on prospects. Jace Peterson has stepped in as our everyday second baseman in 2015. He has emerged as one of the team’s best options with runners in scoring position. However, he has hit just .202 since the All-Star Break. His 2015 is looking more and more like la Stella’s 2014. Don’t get me wrong, I like Jace. I’m just not sold on him long-term as of now. I think he’s a little overrated with the glove as well. With all of that being said, you cant teach the clutch gene, and Peterson has proven to be just that. If he can expand his game, he can be a fine second baseman in this league. The team expressed a vote of confidence in him when they traded away Jose Peraza, but don’t be surprised if the team shows interest in Howie Kendrick or Daniel Murphy this offseason. Dustin Peterson (no relation) has spent the season with A+ Carolina Mudcats. He made the switch from third base to left field due to his less-than-stellar defense. He has had a decent year with the bat, however, posting a .256 average with 8 homers and 59 RBI in 115 games. The 20-year old has room to grow into his body and expand his power, and if he can do that he can be a pretty solid corner outfielder in this league. I have him ranked as the 14th best prospect in the organization. Max Fried has sat out the 2015 season as he recovers from injury, but he will likely reestablish himself as one of the top lefty prospects in the game upon his return. I have him ranked as the 7th best prospect in the organization. Mallex Smith is perhaps the most intriguing prospect in the system, and looks to have all the makings of a dynamic leadoff man. He started off the year with AA Mississippi, hitting .340. Yeah. He was slow to adjust to the AAA level but has finally caught fire and is proving that he is a future big time MLB talent. He has hit .285 with Gwinnett, and between both levels he has stolen 56 bases. John Hart has already made it known that Michael Bourn will have a locker right next to Smith in Spring Training next season, so look for him to be a perfect mentor for the youngster’s skill set. I have him ranked as the 6th best prospect in the organization. Getting all this young talent for a year of Justin Upton is a steal, especially since the team knew they weren’t competing in 2015.

First thing’s first, Jason Heyward is a good player. But that’s it. He’s no superstar, and he’s overrated as hell. This dude is about to get paid when he hits free agency after this season. The team opted to move Heyward just in time, and in return they got Shelby Miller and Tyrell Jenkins. Miller is just 24 years old, but is showing all of the makings of an ace. He has gotten absolutely no run support and has had one of the most unlucky seasons I’ve ever witnessed in professional sports. However, if he had a nice record he would be getting a lot of attention for his performance this season. He did get his first All-Star nod this season, but in Shelby Miller fashion he did not get to make an appearance. Miller’s New Years Resolution will be to get some run support in 2016, but he has proven himself to be a damn good pitcher. Having him team-controlled for four seasons makes him a steal. Tyrell Jenkins ain’t too shabby, either. The righty started the season in Mississippi, and has worked his way up to AAA Gwinnett. Overall, he has been very solid, posting a 3.19 ERA over the two levels. With all the uncertainty surrounding the Braves’ starting pitching staff headed into the offseason, Jenkins has a legit shot to crack the 2016 Opening Day rotation. He’s a nice prospect, and comes in 8th overall on our top prospect list. Getting two high upside arms for a reliever and an expiring player in a lost season makes this trade a win for the Braves (though the Cards are not complaining about their 2015 season thus far).

This trade looked good when we made it, but it looks even better now. Let’s take a look at the basics first. We gave up All-Star closer Craig Kimbrel, but in return we rid ourselves of Melvin Upton Jr.’s albatross of a contract, giving us the financial flexibility we have lacked for years. While the bullpen has been in shambles, Arodys Vizcaino has actually been more effective than Kimbrel this season. Jason Grilli was great before his injury. We have had effective closers all season, which has made Kimbrel expendable. It’s the return that makes this trade look even more juicy. Cameron Maybin has emerged as our everyday center fielder and has posted a career year in 2015. He is finally healthy and has proven to be an ideal fit for Kevin Seitzer’s offensive approach. He has been one of the few reliable sources of offense in our lineup in 2015, and we got more than what was expected out of him. Carlos Quentin was waived by the team shortly after the trade. Jordan Paroubeck is no longer with the team either, as he was traded to the Dodgers for an international pool slot. The Braves built up slot money by making a handful of moves, but moving Paroubeck was part of a series of trades that allowed the Braves to sign international prospects Christian Pache and Derian Cruz, adding two young offensive prospects to the system. Matt Wisler has struggled at times in his rookie season, especially down the stretch. However, with a little more polish I believe he will be a very good starting pitcher in this league. Watching the movement on his pitches can be so fun when he is at his best, and he’s still just 14 starts into his big league career. What a lot of Braves fans don’t realize is how busy of a man Roger McDowell is. Usually pitching coaches have a sense of familiarity with their pitching staff, but the Braves have all starters under the age of 25 as well as a handful of new ineffective bullpen arms coming in seemingly every week. Give Wisler and McDowell time, and the results will show. I have confidence in his stuff. The icing on top of the cake is the compensatory pick the Braves received in this trade, the 41st overall pick. The team used this pick to select Austin Riley, who is tearing up Rookie ball and has all the makings of a future power hitter in this league. He looks like he may be the best offensive prospect we have had since Freddie Freeman. In 217 at bats this season, Riley hit .304 with 12 homers and 40 RBI. After being promoted to Danville, he hit .351 in 111 at bats. Riley is the real deal, and I have him ranked currently as the 10th best prospect in the organization. So let’s take a look at the big picture: in a way we got Cameron Maybin, Derian Cruz, Christian Pache, Matt Wisler and Austin Riley all while getting rid of Melvin Upton Jr. As much as I loved Craig Kimbrel, I’ll take that deal.