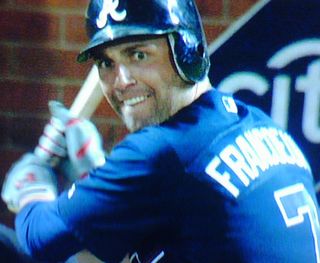 The Braves have brought back one of the most hyped players in recent franchise history in Jeff Francoeur. “Frenchy” has had a very odd career. He was Atlanta’s first round selection in the 2002 MLB Draft, and started off hot when hitting the big leagues and appeared he was going to live up to the top prospect hype that surrounded him in the minor leagues. However, since he was traded to the New York Mets midseason in 2009 for Ryan Church, and has since turned into more of a journeyman player. Since his tenure with the Mets ended shortly after, he has had stints with the Texas Rangers, Kansas City Royals, San Francisco Giants, San Diego Padres, and most recently, the Philadelphia Phillies. This is not to say Frenchy has not been a productive player. He has had multiple up and down seasons since departing from Atlanta, and played a nice role on a Phillies team last season that was in the midst of a very similar rebuilding process. Overall he ended up hitting .258 with 13 home runs and 45 RBI. He would had one of the highest long-ball totals on Atlanta’s roster last season.

Bringing back Francoeur gives the fanbase a name to get excited about and also offers the team a very solid bench piece if he were to crack the big league roster. He is a native Atlantan and played his high school ball at Parkview High School in Lilburn, Georgia. He offers a lot of experience and grit and can still hold his own with the bat at the major league level. He also is a former Gold Glove Award winner. His contract is a minor league deal with an invitation to Spring Training. If he plays well in March and the team cannot miraculously find a suitor for Nick Swisher by Opening Day, it makes it much easier for the team to cut ties with Swisher. Hopefully we will get to see Francoeur’s contagious smile once again in a Braves uniform in Turner Field’s last season. Welcome back to Braves Country, Frenchy, the whole fanbase is rooting to see you on the final 25-Man Roster.