Left Field is yet another position of need for the Braves this offseason. Though the team got more production than expected from Kelly Johnson, the team opted to move the veteran’s expiring contract alongside Juan Uribe at the trade deadline. Considering the production the team has gotten from Rob Whalen and John Gant, I think they got a pretty good return on their investment. I think the team may go a similar route this season. With Mallex Smith close to MLB ready, the team may look to move Cameron Maybin to Left Field and let Smith start at some point in the season. That’s why I think the team should look to sign a one or two-year deal with a guy who has some upside in the meantime. The only thing holding the team back? The contracts of Nick Swisher and Michael Bourn that they are stuck with until the end of the 2016 season. Will the team sign a corner outfielder, or will they use a committee approach using our haul from the Indians? That is yet to be seen, but here are some outfielders the team may look to sign via free agency:

Alex Gordon is really the only long-term option I see the Braves having the money to sign on the free agent market. Yoenis Cespedes and Justin Upton have played themselves way out of our price range. Still in the midst of a playoff run, Gordon is a great hitter and an elite fielder. I really like Gordon, but I think the team needs to find a guy with more power to be their long term option given their lack of power production. However, I could never turn away the three-time All-Star and 4 time Gold Glove winner. Gordon is a winning piece, and is the only guy I’d like to see the Braves invest somewhat heavily in at the position given the market and the Braves payroll as of now. Even then, there are still question marks as to whether he is what the lineup needs in the long term. 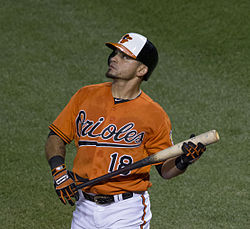 Geraldo Parra is perhaps the most underrated Left Fielder on the open market, and he is a guy who the Braves should definitely keep an eye on this offseason. Parra spent parts of 2015 with the Brewers and the Orioles, hitting .291 with 14 home runs and 51 RBI. I don’t know if you watched the Braves last season, but Parra would have been one of the best players in the Atlanta lineup. He also has two Gold Gloves under his belt. He immediately makes the team better, and should have a lot of value around the deadline if Mallex Smith is ready. The Braves could get a nice return for Parra, or if he outplays him, Cameron Maybin. Atlanta should look to extend him a two-year deal.

Colby Rasmus may never hit for a high average, but he can offer a team one thing: raw power. We saw this showcased in this season’s playoffs. Hailing from Braves Country, he could be exactly what the Braves need as a low-cost option that can offer their lineup some power. Last season, Rasmus hit 25 home runs, which would have easily led the team. He should be able to be had relatively cheap, and Atlanta should express interest.

A local product who attended Sprayberry High School and Georgia Tech, Marlon Byrd has put together a nice 14 year MLB career. Perhaps it’s time for him to finally have a homecoming of sorts. Byrd is a highly productive player who can offer you over 20 home runs and a decent average at what will likely be an affordable price tag. He played left field for the Reds before being traded to the Giants mid-season. He would be a great addition to a lineup that direly needs more production.

Who do you think is the best option Braves Country?