Let’s be real here: the Braves aren’t going to sign Darren O’ Day. They’re unlikely to spend much money at all this offseason as they prepare for better days ahead. Fans hate it, but that’s the reality. This bullpen can be fixed more easily than many believe. With the tutelage of Roger McDowell, the Braves had great bullpens until this past season, when he simply just did not have the resources to work with. A good bullpen could have won this team so many more games. Think about how many leads the Braves saw fade away due to the pen’s struggles. Now add our injured arms back in the mix. Arodys Vizcaino and Jason Grilli should form to be a dynamic late-inning duo. Getting back Chris Withrow and Shae Simmons should offer us viable depth that Atlanta lacked. Withrow may end up being a late-inning option himself if he and McDowell can limit his issues with walking batters. David Carpenter is back in the mix as well, and he has put together his best work under Roger. The bullpen suffered due to injuries and a lack of depth, but that is an issue that can be addressed at the right cost during the winter. Let’s take a look at two more low-cost options that make a ton of sense for the Braves. 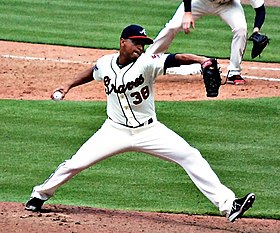 The Braves cut ties with Varvaro last offseason, designating him for assignment, and ultimately trading him to Boston for Aaron Kurcz (who was later traded for international bonus pool money). However, if they could have foreshadowed the bullpen’s struggles to the degree of how things turned out, they likely would have taken back that move. Varvaro was solid in his time in Atlanta, but was not properly utilized by Fredi Gonzalez and was overshadowed by a ton of other talent in what were great Braves bullpens.  In his two full seasons with Atlanta, he posted ERAs of 2.82 and 2.63 with a ground-ball rate of nearly 48 percent. The team would give anything for that type of production right now. The only downside is that Varvaro is a bit of an outlier, as he has had more success against left-handed batters than right-handed batters. However, the Braves struggled mightily to get lefties out last year, and you’re damn right if you think I’d rather put Varvaro out there than Matt Marksberry or Andrew McKirahan. Varvaro only made nine appearances for the Red Sox before being designated for assignment. The Cubs claimed him off waivers, but returned him to Boston when they found that he had a torn flexor tendon in his pitching arm. His recovery time was six months, and he should be able to begin throwing now. He avoided Tommy John Surgery, which is a great sign. If he’s throwing at full strength by Spring Training, don’t be surprised if the teamsgoes a similar route as they did with Carpenter and opts to bring back Varvaro. The team could use that type of familiarity after the horrid cycle of arms they shredded through last year.

Though the team hauled in Ian Krol in the Cameron Maybin deal, his MLB track record is far from spectacular. As I said earlier, Marksberry and McKirahan just aren’t going to cut it against lefties. I am on record as saying the team should sign Matt Thornton, as I feel he is clearly the piece this bullpen is missing. However, I also like Fernando Abad, a southpaw who was just designated for assignment by the A’s. Abad had an unbelievable 2014, posting a 1.57 ERA in 69 appearances for Oakland. He went on to struggle a bit in 2015, as he became more vulnerable to lefty hitters. His ERA inflated to 4.15. That would be an upgrade for Atlanta’s bullpen. He could be another project for McDowell. We saw how Jim Johnson struggled out of the Oakland bullpen and shined here, and we saw how Eric O’ Flaherty did not fare well there either. The Braves should definitely claim this guy off waivers given his upside, and he wouldn’t cost the Braves anything more than $2 million. He also spent 2013 with Washington, so he has a bit of NL East familiarity. Honestly, I’d sign him AND Thornton given the southpaws the Braves have on the roster right now.