It’s no secret that the Orioles are desperate to acquire pitching, and Harrell offers their rotation sume much needed depth. Eric O’ Flaherty has not been great this year, but he is a lefty and the Orioles have reported interest. In return, the Braves get Jonah Heim, a guy who has struggled some at the plate this year but gives the team another backstop in the farm system. The Braves turn depth into a prospect at a position of need here. Casey Kelly or Rob Whalen could take Harrell’s rotation spot, and Williams Perez and John Gant will soon be off the disabled list. The Braves already have three other southpaws in their bullpen, and have a bunch of relievers in AA who could be ready to make the jump when a roster spot opens.

The White Sox sit at .500 (as of the morning of 7/27) and their glaring issue is the bullpen. The team gets a guy with closing experience in Jim Johnson while adding an effective lefty in Hunter Cervenka. All it costs them is Jason Coats, a guy who projects to be a really good fourth outfielder type guy. Coats has put up great number this season in AAA but is a little older for the level. I think he could project to be a Matt Diaz-type player long term for the team, and if Hector Olivera does not come back then he could see a big role down the stretch of 2016. Arodys Vizcaino will be back soon to take over Johnson’s temporary closer role, and Cervenka can be replaced by a prospect. This makes guys like Nick Markakis more expendable at the deadline.

The Indians are trying to make a run this season, and having a utility player like Gordon Beckham with AL Central experience does not hurt. The Braves get a lefty pitcher that they can try to develop in the minors. The Braves have already prepared themselves for a move like this by bringing in Omar Infante. 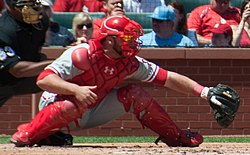 The Phillies have expressed interest in Markakis, and the Braves would love to move his contract. In this deal, the Braves pay 30% of his salary and throw in a couple prospects and a replacement to serve behind Carlos Ruiz. In return they get their potential catcher of the future in Cameron Rupp. The Phils have Jorge Alfaro, who will be ready next season. He is one of the top catching prospects in baseball. The move makes sense for both sides.