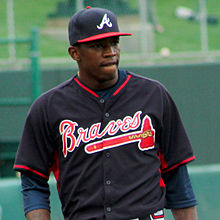 Nearly all of the assets acquired in the domino effect of the Jason Heyward deal are in place. Braves prospect Tyrell Jenkins has finally received the long-awaited call to the big leagues. The former Cardinals farmhand recently underwent the transition to the bullpen, which in turn speeded up his process of making the big leagues.

The move makes sense, as Jenkins profiles better as a reliever. This is due to him being more of a two-pitch pitcher. Jenkins primarily used his fastball and curveball, as his change up is not a very polished pitch. Though he was more of a strikeout guy earlier in his professional career, Jenkins uses his big frame to throw sinking stuff, which has made him more of a ground ball pitcher. With Atlanta’s bullpen hurting for arms, Tyrell can offer a huge boost.

If Jenkins can eventually develop his change up, he could be a good starter for the Braves. It would be foolish to assume he will never see a major league start, but he could end up just being a bullpen guy. Either way, Jenkins is a talented athlete and it will be exciting to see him make his MLB debut. He seems to be a high character guy and here’s to hoping he can be a Brave for a while.

Casey Kelly was optioned to AAA Gwinnett in a corresponding move.