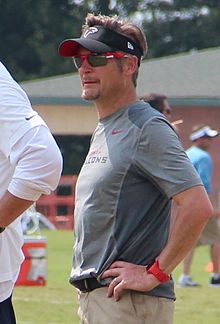 According to Jason La Canfora of CBSSports, major changes are looming for the Atlanta Falcons after this season’s collapse. The offense isn’t clicking. Matt Ryan is in the midst of a career-worst season. Things simply aren’t going Atlanta’s way this season.

The Falcons moved on from former Head Coach Mike Smith last offseason, and it appears they will keep moving in a different direction this offseason. According to the report, General Manager Thomas Dimitroff will likely be shown the door by owner Arthur Blank after an unimpressive tenure with the team.

The report also made it clear that Head Coach Dan Quinn’s job should be safe. Though the pass rush is still a weak spot, overall the defense looks much improved. However, the team started 5-0 but also fell victim to a 6-game losing streak. Their record is currently sitting at 7-7.