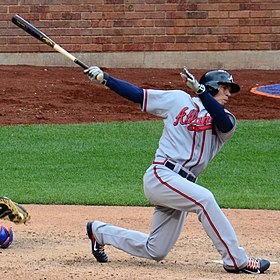 So far in Spring Training, things are looking positive for the Braves. One guy who has particularly stuck out is Ozhaino Albies, a young phenom that many believe could be the second baseman of the future for Atlanta. Though undersized, his elite contact bat has many scouts thinking he could reach the majors sooner rather than later, and the team showed an ultimate vote in confidence in him when they elected to trade away former top prospect Jose Peraza.

As of now, Atlanta’s starting second baseman is Jace Peterson. However, there is a strong possibility that with Kelly Johnson and Gordon Beckham on board, Fredi Gonzalez could use a committee approach at the position. So far this spring, he has penciled in Jace at nearly every position, from shortstop to center field. With Ozhaino Albies closer to MLB ready than most thought, it’s not out of the question to think that he could crack the opening day roster for 2017 when Suntrust Park opens.

Peterson could be molded into a superutility player of sorts due to his raw athletic ability. He played quarterback at McNeese State and has proved that he can play most positions on the diamond. If he adopts this role, many may compare him to Ben Zobrist. I do not think he will ever present the value that Ben Zobrist offers, but he could certainly be a poor man’s version.

A great comparison for Peterson is former Brave Mark DeRosa. During his tenure with the Braves, DeRosa offered a good bat for pinch hitting and provided value because of his versatility. He played every position on the diamond except for pitcher, catcher, and center field. His versatility benefits the rest of the regulars, because if he can play multiple positions he can offer more of the regulars days off during the long, strenuous 162 game season.

Peterson may also be best suited at a pinch hitter, as evidenced by his clutch trait. Though he didn’t hit for the highest average, Jace always come through in the clutch at the right time for the Braves in 2015. This is not something you can simply teach a player.

Though Swanson and Albies are close to knocking on the door of the big leagues, Peterson could still play a very important role on many competitive Braves teams in the coming years. He is cost-controlled until 2021. Perhaps he phases out, and maybe he plays well and the front office uses him as a trade chip down the road. However, Jace has the potential to offer this team a ton of value, even if he’s not in the lineup every day.