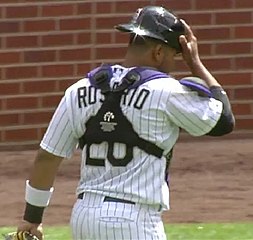 The future at the Catcher position is very cloudy for the Atlanta Braves. Christian Bethancourt is still yet to prove he can be an every-day Catcher in this league. The former highly touted prospect performed well when demoted to AAA mid-season, and Fredi Gonzalez said to expect a lot of starts from him down the stretch. However, it was 38-year old A.J. Pierzynski who assumed the Catcher role all season. A.J. ultimately ended up catching 113 games, with Bethancourt and Ryan Lavarnway making spot starts.

The Braves have a big decision to make in regards to the position, and realistically they have four options to address it. At this point, I think the most likely scenario is the team re-signing A.J. to another one year deal. The team could have gotten at least a mid-level prospect for the veteran, much like the team did in the Juan Uribe and Kelly Johnson trade. It has been confirmed that the Minnesota Twins had interest, and I’m sure there were other teams as well. Sure, Pierzynski played an instrumental role in managing a young pitching staff, but why keep him around when it’s clear Bethancourt needs to be playing everyday to properly gauge his value? I think the team wants to bring back A.J., but there is still no guarantee he will even want to come back. He will be 39 next season, and if I’m him, I’m looking to sign with a contender. The Braves need to be eyeing the future, and they have a few options to go about doing so.

One option would be to let Bethancourt be the everyday starter next season. This may not be the most appealing option for Braves fans, as he has disappointed in his major league stints. However, I do think the only way Atlanta will ever know for certain is if he gets consistent at bats. The team not only has doubts with his ability with the bat, but his ability to manage a pitching staff as well.

There has also been some buzz generating that the Braves could be an ideal fit for Georgia native and Georgia Tech alumni Matt Wieters. Don’t get me wrong, I think Wieters is one of the most talented two-way Catchers in the game, and if the Braves brought him in that would be huge for the team. However, the price has to be right. It looks like there’s a strong chance the Orioles let him walk, but injuries have limited him to just 101 games over the span of the last two seasons. Wieters is what this team needs, but it’s the Braves. Chances are they don’t open their wallets.

The other option they have is to make a trade. The perfect buy-low candidate for the team? Wilin Rosario.

The Braves need power, and the Rockies need pitching. Freddie Freeman led the club with just 18 home runs this season, and the team clearly needs some more pop in the lineup. Bring in Rosario. The 26-year old broke onto the scene in 2012 as a rookie, posting a .270 average with 28 home runs and 71 RBI. His performance was good enough to help him finish fourth in Rookie of the Year voting that season. He followed up with an even more impressive campaign the next season, hitting .292 with 21 homers and 79 RBI. However, his defensive play has had him fall out of favor with the club. The team decided that Nick Hundley was their guy, and Rosario ended up having to play first base mostly this season and had to spend time in AAA. He wasn’t putting up the type of offensive performance he did in his first two seasons, but he still held his own with the bat at both levels.

Rosario was recently quoted saying: “If they want to move me, I’m good with it,” and followed by saying, “If it gives me a chance to play more, I’m fine with it.” It’s looking as if his time with the Rockies will soon be coming to an end. He still considers himself to be a Catcher despite his defensive flaws, and isn’t a free agent until 2018. He is a low-risk, high reward option for a team that is desperate for bats right now. No player is perfect, and A.J. Pierzynski is actually one of the worst catchers at throwing out base stealers in the league. Even if he does not start and plays a Catcher/First Base bench role, he would still be a valuable asset to this team.

The Rockies have not been able to develop quality starting pitching for years, and playing in the launching pad that is Coors Field certainly doesn’t help things. They are desperate for young arms, and Williams Perez definitely shined more times than not last season. Lefty relievers also don’t grow on trees, and while I’m not sold on the young McKirahan, he could be a very appealing option for the men in purple pinstripes. These guys are just as desperate for pitching as Atlanta is for bats right now, perhaps even more so. When Rockies’ GM Jeff Bridich was asked about Rosario’s trade value, he was quoted as saying, “The trading queries were pretty quiet on Wilin.” Colorado would definitely make this trade, and it’s clear they have been gauging his value for a while now. It’s only a matter of time until he’s donning another uniform.

As of now, the Braves have Perez, Shelby Miller, Julio Teheran, Mike Minor, Matt Wisler, Manny Banuelos, Mike Foltynewicz and even Tyrell Jenkins and Ryan Weber competing for five rotation spots next season. Needless to say, they may have to make a few moves to allocate all of those innings. I like Perez, but the Brvaes should get a return on him while we can. Realistically, if he remains with the team there’s a chance he would have to return to AAA next season.

The move makes sense for both sides, and is quite similar to the trade in which we sent David Hale to Colorado for catching prospect Jose Briceno. The team has nothing to lose in this scenario, and Catchers that can hit for power are a luxury in today’s game. It’ll be interesting to see how the scenario plays out this winter, but Rosario is a name well worth keeping an eye on.