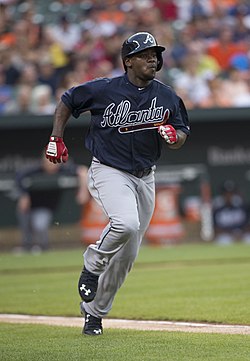 It has been a long road to the big leagues for Adonis Garcia. The journeyman spent his first seven seasons in the Cuban National series, the number one league for amateur baseball in Cuba. He was eventually scooped up by the Yankees, spending multiple years in their minor league system. But after several years in the Yankees farm, they opted to release Garcia, and it seemed his major league dreams were never going to come true

Insert the Atlanta Braves, who gave him another shot by signing him to a minor league deal, and were perhaps equally as desperate for talent as Garcia was for a chance at the big leagues. At 30 years old, after tearing it up for AAA Gwinnett, he finally made his major league debut in 2015 for Atlanta.

The Braves never expected much for Garcia. At best, they might have thought Garcia was going to be a stopgap during the rebuild. But after last night’s three hit night, Garcia raised his average to .268 on the season and has proven to be one of the Braves most reliable players since his stint in AAA. The trade for Matt Kemp signified the turning point in the rebuild. Atlanta wants to be competing for a playoff spot next season, and it might be time to start believing that they can do that with Adonis Garcia at third base.

The start to the year was one to forget for Garcia. After an impressive first season with the Braves, he began 2016 struggling with the bat and was even worse in the field. Garcia’s fielding percentage was a dismal .837, which led to the Braves demoting him to AAA, and it worked. Garcia raked in AAA, which saw him promoted back to the big league squad, and his production did not stop.

Since being called up Garcia has been the most productive of his career. He has hit close to .300 with 9 home runs, but has been even more impressive on defense. His fielding percentage is up to .929 for the year and he looks much more comfortable at the hot corner. He has even made several outstanding diving plays, including one many might remember, in which he dove into the stands for a fly ball and made the catch.

Garcia has now played in 158 major league games in his career, just shy of a full season. Over that span, he has hit .271 with 20 home runs and 69 RBIs. Those numbers are better than just about anyone’s on the roster not named Freeman, Kemp or Markakis, and they are even more spectacular when you consider this is his first full season in the majors.

Even with Garcia’s improved play, there is still plenty of reason for the Braves to be cautious. The sample size is small, and in baseball, nothing is guaranteed. Players have nice start to their careers then fizzle out quicker than me after a couple shots of tequila, and with Garcia being a 30-year old journeyman, this may be the case.

The problem is, Atlanta does not have many other options at this point. Their top prospect at the position, Rio Ruiz, has begun to show improvement at the minor league levels. However, he has awful numbers against left-handed pitching and does not appear to be major league ready. The free agent market is dry in general, but the options are even thinner at third base. The Braves primary target would likely be Justin Turner of the Dodgers, but his numbers this year are going to attract a number of suitors, and it is tough for me to see the Braves outbidding the likes of the Dodgers and others for Turner’s services.

Garcia’s evolution into a solid major-league ballplayer is key to the Atlanta Braves success. At the moment, he has at least given the Braves an option at the position moving forward. If he can put up similar numbers offensively in a full season next year, the Braves would likely take that. But if the Braves believe in an internal option or can find the right free agent, Garcia has done enough to garner trade value. The Braves could deal him for another prospect or prospects to add to their already loaded farm system. Garcia’s surprising play has allowed the Braves to speed up the rebuild process, and while Atlanta could opt to go in a different direction, I would not mind to see Garcia at the hot corner on opening day in the new SunTrust Park.