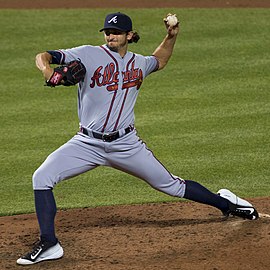 It’s been a tale of 2 seasons for Andrew McKirahan.

The 21st round pick by the Cubs and the Rule 5 pick from Miami had a promising start to 2015 after he was claimed off of waivers and assigned to Atlanta; he had allowed 2 runs off of 3 hits and 1 walk in 4.1 innings. His stuff looked impressive; and he looked like a key man in the bullpen for the upcoming season. However; he was suspended 80 games on April 20th for testing positive for Ipmorelin: a growth hormone. He let the fans and his club down by cheating, which already put him on thin ice.

Since then, he’s been a disaster. The LHP had a 4.35 ERA entering last night’s game against New York. He gave up 4 runs, including a Brian McCann 3 run HR. Jonny Gomes even stepped in an pitched an inning for the Braves tonight and was more effective than McKirahan. Gomes only gave up two earned runs in an inning pitched; Andrew had 4. McKirahan’s ERA now sits at 5.82 over 21.2 IP. McKirahan has been roughed up a lot as of late; 12 ER over his last 17 IP.

There’s a chance Atlanta keeps him around (because this season is a wash anyways), but don’t be too shocked if he’s gone before Saturday’s matchup against the Bronx Bombers.