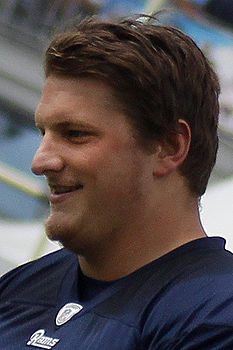 The Falcons offensive line has been the Achilles heel of the team for the past few seasons, and Dan Quinn has been quick to make moves and shuffle around the line in order to provide Matt Ryan some protection. The line has been injury marred in past seasons, and Quinn is looking to add some depth. That’s why the team has opted to sign tackle Jake Long to a one-year deal, first reported by Ian Rapoport.

Long was the number one overall pick in 2008, and has had stints with the Miami Dolphins and St. Louis Rams. He has started every game in his career, and made the Pro Bowl for four straight seasons from 2008-2011 (he also made the team in 2012 before tearing his bicep). However, the Michigan product saw what was already a down year in 2014 end after just 7 games with a torn ACL. Long has been linked to the Falcons for weeks, but just recently got medically cleared by Dr. James Andrews. This move is a nice investment by the team. Jake Matthews had an injury marred season as well in 2014, and it wasn’t pretty. Long can mentor Matthews and Ryan Schraeder and push them to keep their starting jobs. Depth is key in this league, and it’s been an issue for Atlanta in past seasons. Long offers the Falcons a low-risk, high reward option and a high quality backup option for any line in the NFL. If he can return to form, he can offer Atlanta help at a position of need. Also, if he proves his worth, regains his health and earns a multi-year deal next summer, the team would receive a nice compensatory pick.

The team has cut Charles Godfrey as a corresponding roster move.