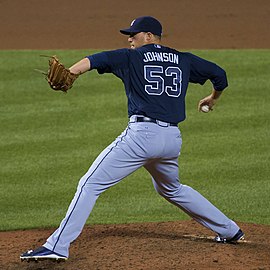 The Braves have signed 32 -old RHP Jim Johnson to a 1-year deal worth $2.5 million in base salary. Great move for Coppolella and company, as Johnson made enormous strides with Roger McDowell in 2015 and looked like his 2012 self. In 49 appearances for Atlanta, before being traded to Los Angeles, Johnson posted a 2.25 ERA with 33 Ks and 9 Saves. Jim did have trouble after leaving the Braves, and never found his niche in a very mediocre Dodgers pen. His 10.13 ERA in LA may have left the Braves as his only option.

McDowell reuniting with Johnson is not only going to benefit Jim, but the Braves. Johnson was coveted at the deadline by many teams, and may end up being traded again. Johnson knows how things are working in Atlanta: He performs for us, mentors a young pen, and then can get traded to a contender with a chance to win a ring. With a guy like Johnson not getting any younger, he doesn’t mind being sent to a contender. If we don’t get a good trade for Jim, we keep him. JJ looks to be a valuable member of our pen, and a chip at the deadline. It’s a win for both parties, and a great move by the Braves. If he does poorly, we eat $2.5 million. That’s nothing to an MLB club.