Note: Picks from the last few years will be omitted due to not having a gauge on their MLB talent (Bryant was taken 2nd in 2013, Appel has a lot to live up to). Picks who didn’t sign will obviously not be included either. This will be based mainly on performance for the team that drafted them and partially their career. Championships are a big factor

No question the biggest draft bust in MLB history. Blue Chip shortstop who never made it to the bigs. With a slew of DUIs and legal troubles, he’s currently in a Florida prison.

Never reached the bigs. Career minor league record of 22-30, 5.12 ERA. Injuries slowed him down, and Taylor never advanced past AA. After working as a UPS package delivery worker, Taylor was indicted on Cocaine trafficking in 2012. He was released from prison in September, 2014.

Chilcott is the third and final #1 overall pick to never reach the majors. Chilcott dislocated his arm and shoulder diving into 1st base on a pickoff attempt, and was never the same. Reggie Jackson was taken the pick after.

Hamilton has had a fine MLB career, but not in Tampa. Combining multiple failed drug tests, a car crash, and a slump, Hamilton was left unprotected and selected by Cincinnati in the Rule 5 draft in 2007 before ever playing for the Rays.

Chambers played in only 57 major league games, batting .208 with 2 home runs. Chambers’ only saving grace is that there were no Hall of Famers in this class.

Goodwin holds the distinction of being the only player ever selected first overall twice. When he signed in 1975 (a very weak class), he signed and finished his career with an unimpressive .236 average and 13 HRs. After 7 years with multiple teams in the MLB, he finished in Japan.

Anderson (and his $2.5 Million signing bonus) were taken 1st in 1997. He had a poor career, and eventually became a reliever for 7 years. He posted a 15-7 record with a 5.19 ERA. 8 MLB all stars, some active, were taken in the next 21 picks, including Jason Grilli, Michael Cuddyer, and JD Drew.

Phil Nevin lands on this list, but make no mistake, he had a solid MLB career. However; he only played one year in Houston and it took him until 1995 to get to the bigs. .270 and 280 HRs is better than most could do. However, his claim to fame is that Houston’s head scout wanted to draft a kid named Derek Jeter, who fell to the Yankees. Houston took Nevin, and also the scout’s resignation the day after.

Bullington was the top choice in 2002, so close your eyes Pirates fans. Zack Greinke, Matt Cain, and Cole Hamels were all taken later in the first round. Bullington bounced around the league, never seeing much time in the bigs. He went 1-9 with a 5.62 ERA. He’s currently playing in Japan. At least they got Gerrit Cole.

My favorite memory of Paul Wilson was watching Kyle Farnsworth bodyslam him after Wilson was beaned while in Cincy. Wilson had a 40-58 record with a 4.86 ERA. After playing for a few ML teams, he retired in 2005.

Note: It kills me to not put Horner on this list. Injuries plagued him worse than #2 on the list, but Bob gets honorable mention.

Monday will always be loved by all Americans for preventing 2 Vietnam protesters from burning the American flag on the field at Dodger Stadium. Monday also had a great career, hitting .264 with 241 Home Runs. He was traded to the Cubs for Ken Holtzman, the ace of the A’s staff that 3-peated World Series titles.

JUp was always a standout, even on a very bad Diamondbacks team. For 5 years, he kept them semi-relevant and got them Martin Prado and a slew of top prospects from the Braves. He’s a career .273 hitter with 178 HRs. His numbers will improve with age. Also playing for a division rival now. Double Yikes.

Erstad’s spot on this list can be credited to his 10 years in LA, along with his 2000 season in which he hit .355 with 240 hits. His 25 HRs combined with spectacular defense got him MVP consideration. On the 2002 Championship team, he hit .421 against the Yankees in the ALDS, .364 in the ALCS against the Twins, and .300 in the World Series against the Giants. Being the heart and soul of a championship team complemented by an elite arm and good bat will earn Erstad #7

Steroids aside, Rodriguez was very valuable to Seattle when he was selected 1st overall. He spent 6 years in Seattle, and is a career .298 hitter and is a member of the 3000 hits club. He has to be recognized on this list, mainly because his value in Seattle is believed to be pre-steroids. Ditching Seattle for more money drops him from about 3rd in talent.

This was a toss up between Mauer and this next guy. The next guy won a title with his team, so he gets the edge. Mauer has a career .313 average, and has 118 HRs to go along with 1,686 hits. He’s spent his whole 11 year career with the Twins and is no doubt the face of their franchise.

Darryl only won one World Series with the Mets, but he claimed another 3 rings with the Yankees. His .253 average isn’t as good as Joey’s, but his 335 Home Runs are fairly impressive. Bottom line: he led his team to a title 6 years after he was drafted.

One of my all time favorite players, The Kid may seem like a lock for #1 on this list. However, Braves fans all know who is going #1. Griff spent a total of 11 years in Seattle, and some believe injuries kept him from owning the home run record. Career .284 average, 2,781 Hits, and 630 Home Runs. Griffey’s one of the best to ever do it, and I have nothing but respect from him. He was almost a Brave before Willie Mays convinced him to sign in Seattle again. 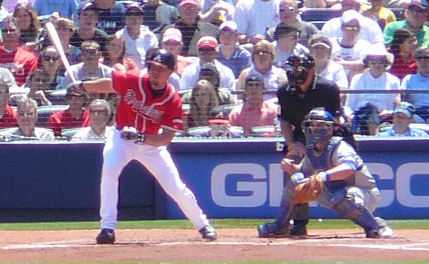 This is a completely unbiased opinion. 2 things separate Chip from Griffey:

Their numbers were actually very similar; Jones hit for a .303 Average, 2,762 Hits, and hit 468 HRs. They both won MVP once, but Jones’ consistency, health, and being a career Brave puts him at the top of ANYONE’s list. He hit .364 at age 36, enough said. Hands down, he’s the perfect #1 overall choice.