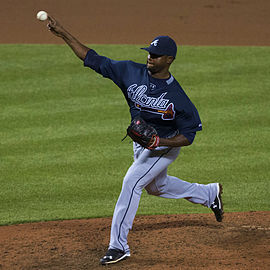 Atlanta’s closer Arodys Vizcaino will be heading to the 15-day DL due to a right oblique strain according to the Braves official Twitter account.

RHP Arodys Vizcaino has been placed on the 15-day DL with a right oblique strain. LHP Eric O'Flaherty has been reinstated from the DL.

The injury occured in an 11-2 loss to the Rockies yesterday. Vizcaino has struggled as of late, allowing earned runs in four of his last five appearances. Apart from this rough stretch, however, Vizcaino has been a lights out closer with electric stuff and one of the few bright spots on a struggling Braves team. Eric O’Flaherty was reinstated from the DL in a corresponding move.

In Vizcaino’s absence, veteran reliever Jim Johnson will likely assume the closing role. After a dismal start to his season, Johnson has once again turned into one of the Braves most reliable relievers. He spent time as the closer last year in Jason Grilli’s absence and was terrific prior to being dealt to the Dodgers.