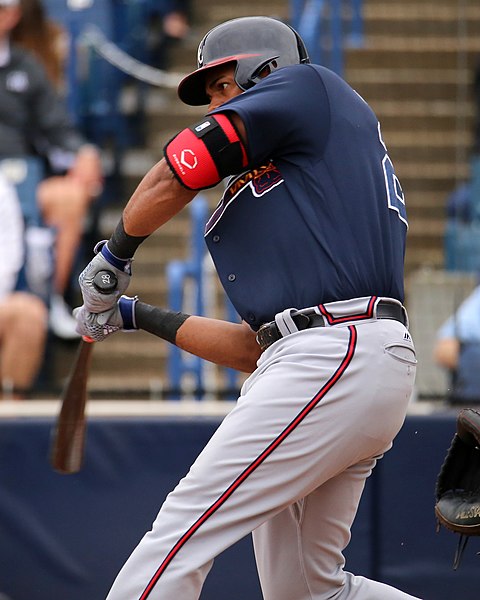 Many Braves fans were not pleased when the team parted ways with Alex Wood, Jose Peraza and others to acquire Cuban slugger Hector Olivera. A star second baseman in Cuba, he was signed to a 6-year/$62.5 million deal with the Dodgers, with LA picking up the tab on the signing bonus. While Olivera was on the wrong side of 30, he was under team control until 2022. This still fit the bill of the Braves acquiring a long-term asset, and there was a scarcity of talent on the free agent market at third base, where he had been converted in the big leagues. The hope was that Olivera would add another power bat at third base to help Freddie Freeman in the lineup.

Things have not gone as planned since acquiring Olivera, and John Coppolella has even himself publicly displayed buyer’s remorse on the team’s behalf. Olivera has been unable to stay healthy, has shown an inability to play at the hot corner, and the cherry on top is his recent suspension from the MLB’s domestic abuse policy. He was suspended 82, the longest suspension for such an offense. While one could argue this lengthy suspension proves he has done his dues, society has rightfully cracked down on domestic abuse in recent years, especially in the sports world. While everyone deserves a second chance, the Braves may not wish to associate themselves with Olivera as it could show the fanbase they are not sensitive with the issue.

Olivera has shown flashes of good play in America. His play was quite pedestrian last season in a short sample size with the team. However, he made many stops to minor league affiliates of both the Dodgers and Braves, was bothered by injuries and was separated from his family for the first time. Olivera then had a terrific spring training, hitting .393 in 62 at bats. He did not get much time on the diamond before the news broke of his incident, and he was suspended immediately. Olivera once again made noise in his return in a rehab start on Saturday for the GCL Braves. Olivera hit 4-5 with a home run, double and three RBIs.

These signs are encouraging but not enough to keep Olivera around based on his play. The Braves are very invested in him, so the fanbase should not be surprised if come August 2nd, the Braves keep him on board. Domestic abuse is not okay, we all know that. However, Olivera has gone through all the steps of bettering himself as a person, and he also comes from a different culture.

There are many variables involved. Olivera is due to report to Gwinnett this week, and if he sets the world on fire there that could very well factor into the decision. Mallex Smith is also injured, and Nick Markakis is on the block, so it could depend on how the deadline shakes out. With Coppy publicly saying that the deal was one he regrets, it would be fair to assume there is a 60% chance Olivera is never a Brave again. A better chance than not. The team is declining to reveal their intentions, much like the Rockies did wth Jose Reyes before releasing him, but there is a possibility they have not yet made up their mind.

If Olivera is brought back, the fanbase must allow him to earn back respect. It would be terrific to see him succeed on the field, but it would be even better to see him use his platform as an MLB player to speak out on domestic violence.

The Braves have a big decision to make… the fanbase will find out on August 2.