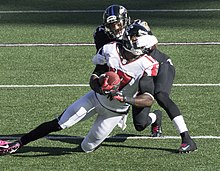 The Falcons announced that they would be releasing future Hall-of-Fame returner Devin Hester on Tuesday. Hester has been the best returner of all time over the course of his career. In 2014, his first season in Atlanta, Hester took back a dazzling punt return for a touchdown to set the record for the most total return touchdowns (20).

The Falcons signed Hester to a three-year deal prior to the 2014 season and got a lot out of the veteran receiver/return man. Hester caught nearly 40 balls for over 500 yards in his first season as a Falcon. Even in his thirties, he proved to be a dangerous threat every time he touched the ball. In 2015, a turf toe injury forced Hester to the injury reserved list before the beginning of the season. He did return and play in five games for the Falcons but never played a down on offense.

Atlanta was hopeful Hester could return healthy and contribute this year, but with the Falcons adding Mohammed Sanu and the emergence of Justin Hardy in his second season, Hester was likely never going to see much time on offense. Dan Quinn believes Eric Weems, who has spent a lot of time as a returner, can handle the duties as the return man on both kickoffs and punt returns. Weems certainly does not have the track record that Hester does, but he is more than capable return man.

By cutting Hester, the Falcons saved about three million dollars in cap space. At 33, it is unclear if this is the final step in Hester’s illustrious career. He has provided sports fans with spectacular returns ever since his days at Miami. He has simply been a thrill to watch and it will be a shame if his final season was one hampered by injuries.