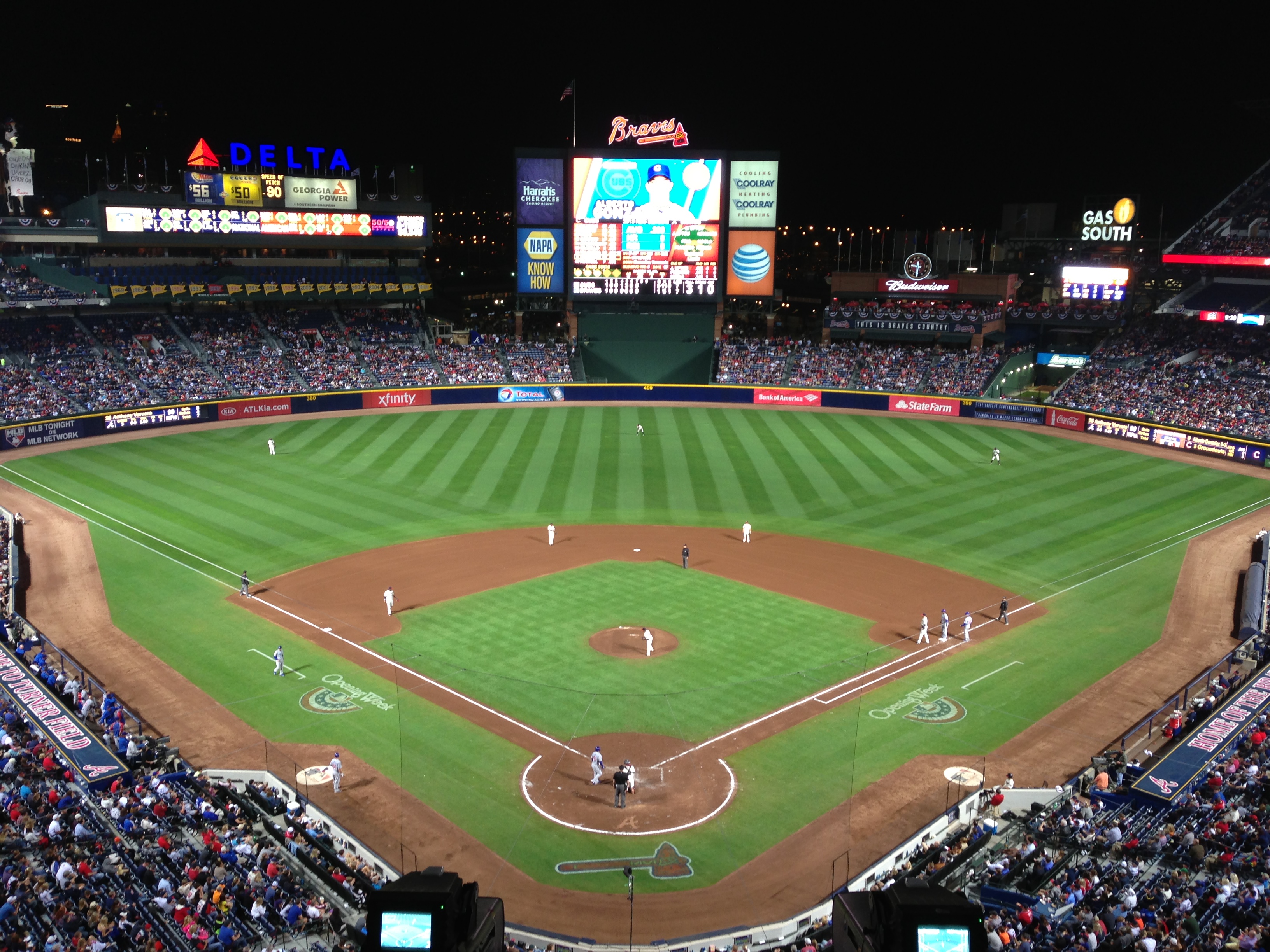 Though they fell short in the postseason, the Houston Astros and Chicago Cubs showed America how fast you can rebuild a team. Though the Braves were a bottom 3 team this year, I think they have the talent and flexibility to make a few moves and be competitive this season. In this article, I am going to make hanges to our roster via trades and signings that I think would highly benefit the team. When you put the pieces in place and realize how realistic many of these moves are, it may paint a picture as to how soon the team may be able to compete if the front office wants it to do so. The only thing holding Atlanta back is that they will likely only have around $15-20 million to spend. We will be going by position, so let’s take a look:

I think it’s inevitable that the team looks to move some of the starting pitchers from last season The Braves have 9 arms competing for 5 spots. I think Shelby Miller and Julio Teheran are a great young duo to build around, and I’m not entertaining any offers for them. They will be our young, talented, cost-controlled starters for the foreseeable future. The rest of the rotation is not as much of a given. In this scenario, I am bringing Mike Minor in at the arbitration cost he and the team agreed on last season. I see Minor as an investment. He’s talented, but I think his health concerns make him too much of a liability in the long run, and his arbitration battle likely left a sour taste in the front office. If he’s healthy, I’m plugging him into the rotation for now to generate some trade value, and when a team bites, I’m giving Tyrell Jenkins the call. I think he’s a fine young prospect, but he probably needs a little bit more time in AAA before making his debut. This leaves us with five more guys competing for two more spots. If I’m the man making the decisions, I’m going with Manny Banuelos and Matt Wisler. I think these two guys have the most upside to be great MLB starters. Weber goes back to AAA, and Folty and Williams Perez’s fate will be determined shortly.

By far the biggest flaw of the 2015 team was the bullpen. This will no longer be an issue. First things first, no lefty from the 2015 team will be on the roster next season. Paco Rodriguez will miss the entirety of the 2016 season, so it’s an issue that will have to be addressed. Ross Detwiler walks, and Andrew McKirahan and Matt Marksberry just aren’t going to cut it. The team will have to go with an external option to address this team need.

The Braves need a reliable lefty, and Thornton offers that at a reasonable price while offering a ton of NL East experience. The Nats will have a lot to worry about this offseason, and Thornton is likely not very high on their priority list. Last season, he had a 2.18 ERA and held lefties to a .198 average. I like Brandon Cunniff, but he will be my guy who will likely spend some time between AAA and the big league club next season due to potential injuries, struggles or trades. However, with the exception of Thornton, the rest of the bullpen will be our guys from last season. Danny Burawa showed some promise, holding batters to a .195 average in his time in a Braves uniform last year. He gets a front-end bullpen spot. Daniel Winkler only made a couple of appearances in the bigs last season, but I anticipate he earns a spot in the bullpen. He has phenomenal minor league numbers and I think he has the potential to be a nice addition to the bullpen. The number one priority as far as the bullpen goes is getting healthy. The team will get back Chris Withrow, Shae Simmons and Jason Grilli. That is a huge boost for the team. Withrow is nearly unhittable, but just has to tame his control issues. He and Roger McDowell could prove to be a perfect match. Look at how much better Jim Johnson pitched in Atlanta this past season than L.A. Shae Simmons was also highly effective as a rookie and is a great reliever. This leaves Jason Grilli and Arodys Vizcaino to work the late innings. The bullpen won’t just be improved, it’ll be great as long as the team can stay healthy.

This is where I’m switching things up for the Braves.

The Braves sign Matt Wieters to a 4-year/$48 million contract.

Another 8 figure contract to an injured Oriole? Have I lost my mind? Not quite. We all know Wieters has connections to Atlanta, being a Georgia Tech almuni and such. This boils down to the Braves filling a position of need that is usually very hard to fill. It’s not everyday that a Gold Glove award winning backstop who can hit you 20 home runs goes on the market. A big factor in the Hector Olivera deal was the Braves wanting to fill a position in which the market was very weak for. I see this as a rare opportunity. Sure, the team can bring back A.J. Pierzynski, but this is a temporary option given his age. I’m moving Christian Bethancourt while he still has value, but I’ll get back to that in a bit. Let’s take a look at a move I’d make to pick up a solid backup Catcher:

The Braves need bats, and the Rockies need arms, it’s as simple as that. The Rockies have actively look to find a new home for Rosario, who is just a few years removed from a campaign in which he hit 28 home runs. He may be a defensive liability, but he can fill in behind the plate, play some first, and DH against AL teams. The Braves don’t need Perez and the Rockies don’t need Rosario. It’s a perfect match.

The Braves learned their lesson by not carrying a backup first baseman when Freddie Freeman finally struggled with the injury bug this season. Kelly Johnson and Chris Johnson were not great defensive replacements. Rosario backs up our stud in Freddie Freeman.

I would love to upgrade at second base, but we likely will not have the financial means to do so if we sign Wieters. I’m giving Jace Peterson an opportunity to build upon his rookie season. He hit only .239, but displayed clutch hitting and was a serviceable replacement. Ozhaino Albies is likely the second baseman of the future with the team, but Peterson may hold his job until then, if the team does not want to invest heavily in the position. I think the team will ultimately part ways with Pedro Ciriaco, and let Daniel Castro take over as the utility infielder. He may ultimately end up challenging Peterson for the starting job at second.

The Braves already made their move at this position, acquiring Hector Olivera at the trade deadline. Hopefully the Cuban product performs as planned for the team. If he can be a middle-of-the order guy, that changes the dynamic of the whole team. I love Adonis Garcia for pinch hit situations and would love for him to have a spot on the team, but I want a bigger role for Olivera and a smaller one for Garcia. Like second base, no changes are to be made here.

A lot of people expect Andrelton Simmons to expand his game, but I think he is what he is. He is the best trade chip on this team, and if the team wants him to be featured in a blockbuster, I probably wouldn’t be opposed to it. However, Simmons was third this past season in WAR among qualifying shortstops, and I could see him becoming a slightly better hitter if he hits more balls to the right side of the plate. Daniel Castro is also a guy who I think has a positive MLB future ahead of him, and he will back up Simmons.

Here is where things get pretty tricky. First thing I would do is try to get some value for players I’m not sold on such as Christian Bethancourt and Mike Foltynewicz.

Richie Shaffer is a powerful player who made his MLB debut for the Rays this season. He struggled in a small sample size and played first base, third base and the corner outfield positions, but still showcased his raw power. The Rays really need a starting catcher, and Folty’s “stuff” could be appealing to a team who is constantly having to seek out cheap cost-controlled talent. Bethancourt and Folty were much more highly touted prospects than Shaffer, but I think he’s a guy who can step in and hit 20 home runs. The Rays are on the hook for one year of Swisher’s deal, and they may look to just waive him. Cleveland sent cash considerations to the Braves for part of his deal, so we would likely have to reallocate those finances to the Rays. This deal benefits both sides, and gives up some financial flexibility to make our next move:

Bringing in another local product opens up a ton of avenues for the Braves. First off, they would finally get some production of of the left field spot. Byrd is always good for at least 20 home runs and 70 RBIs. I cannot emphasize how badly this lineup needs that type of production. This also serves as a nice investment, because Mallex Smith is almost major league ready. He is our centerfielder of the future, and the team will be able to then trade either Byrd or Cameron Maybin and restock our farm system even more once he hits the bigs. Eury Perez sticks around as organizational depth and gets a lot of calls to and from Gwinnett. Byrd starts, and Shaffer backs up while making spot starts at various positions. Basically, he takes Nick Swisher’s role.

Mallex Smith is a stud, and is our leadoff hitter and centerfielder of the future. He should be in an Atlanta uniform by the end of next season. In the meantime, Cameron Maybin is the starter. Coming off a career year, Maybin has found a home in Atlanta. However, he may be moving positions or zip codes once Smith hits Atlanta. He played left field at times last year, but they may look to get young talent in return. It’s a controversy in the making, and one worth keeping an eye on. Michael Bourn sticks around to mentor Smith.

Nick Markakis is a hitting machine, and he should be even better in 2016. A full offseason of rest should help him regain most of the strength he lost from neck surgery last offseason. Markakis plays out his contract as long as I’m around, and I’ll be the first to defend it. Expect a ton more production out of one of the team’s best hitters next season.

First think I’d do is call Fredi in and give him the can. Pendleton becomes the team’s manager.

The Braves’ payroll sat a little under $110 million last season, so I’m trying to keep it in that ballpark for 2016 as well. With Uggla now off the books, we have around $78 million in commitments for next season. Add in my three signings, and that adds around $23.5 million in payroll. However, I also got rid of Nick Swisher’s contract. That is over $20 million under what our payroll was last season. These moves not only improve the team, they offer financial flexibility for the future. Let’s take a look at how the final roster shakes out: